Since the beginning of the pandemic, the majority of us (reluctant or not) have joined the world of Tik Tok. The fun loving platform increased its popularity by 75.2% last year, reaching 8.5 million users. It’s easy to operate app with short video formats, has grasped the attention of audiences worldwide.

Whether you love it or ‘hate’ it, a large number of us know about it! From trending dances to cute animal content you didn’t know you needed – Tik Tok  has taken the world by storm. With 689 million global active users as of January 2021, TikTok ranks as the 7th most used social network in the world. If it’s so great why are people disliking it?

It’s no secret that a section of the internet (cough cough millennials) have or did have something against the platform…que me in March 2020, ‘It’s  just an app for 12 year olds’, now a fully fledged Tik Tok addict.

Even those who are not a part of the 2 billion users that have downloaded the app, are clearly getting their content elsewhere with ‘‘​​TikTok’’ being the third most common search query on YouTube.

Basically, if you’re not consuming this content on Tik Tok, the likelihood is you’re consuming it on another platform. For example, Instagram Reels, the new IG feature which bears a strikingly similar resemblance to Tik Tok, essentially just re-shares content from other Tik Tok users.

Don’t be late to the party – utilise the platform!

Over 40% of its users are aged between 16-25. If you’re currently thinking to yourself, ‘well that’s not my target market, there’s no point investing any money into Tik Tok advertising’… I bet you also thought that about Instagram at one point as well!

The beneficial feature of Tik Tok is that all content is user generated and as UGC is so relatable, 92% of consumers trust this type of content. You can really show off your products or services, authentically.

The platform sees higher levels of receptiveness from its users due to each FYP (for you page) being unique to every individual thanks to Tik Tok’s clever algorithm, so the platform is a great way to increase awareness and get your brand in front of the perfect audience.

This along with the fact users spend an average of 52 minutes per day in the platform shows just how engaged they are and with such a wide variety of content being offered, advertisers have the space to capitalize.

So don’t be ‘embaraazed’, Tik Tok is the platform for you!

If you want to chat about how you can use Tik Tok for your paid media campaigns – drop us a line! 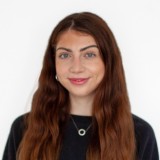 Ellie is an experienced content writer with a demonstrated history of working in the publishing and digital marketing industry. Skilled in Paid Social, Journalism and Creative Writing, Ellie’s day consists of the management of social accounts and a variety of platforms such as Facebook, LinkedIn, Instagram and Pinterest.